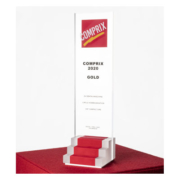 Ammerbuch/Hauppauge, November 26, 2020: At the 28th Comprix competition, the most creative healthcare campaigns of the year were awarded. In the category Dental-/Oral-Care Professionals, the vhf clip Dental from Deutschland prevailed against the competition and won the first place. Not the first prize for the short vhf video: earlier, a jury of Healthcare Marketing and Dental Marketing already awarded the clip as spot of the year 2019.

In Germany, the Comprix Award is a seal of quality for excellence and creativity for particularly outstanding works in healthcare communication – awarded by about 70 jurors in three expert juries. With 342 submissions in 48 categories in total, this year’s competition had the highest submission rate in the last ten years. The award ceremony took place in September this year, both on site in Cologne and virtually.

vhf could once again win an award with their clip Dental from Deutschland. The star of the successful video is the Z4 – a high-precision milling and grinding machine for same-day dentistry. Its futuristic housing contains state-of-the-art technology that enables perfect dental restorations to be produced within minutes. The objective was to develop a film for this dental machine, which can be used at trade shows worldwide, on the homepage of vhf, and in social media. The intention is to tell Made in Germany in a completely different way and as surprisingly as possible.

The project was realized by the agency Schitto Schmodde Werbung (now Circle Kommunikation) with a humorous story about German clichés and virtues, combined with a lot of courage for self-irony. The result: high-tech from Germany is sold with a wink and an unusual sense of humor – happy ending included.