You are here: Home1 / News2 / Gold for Dental from Deutschland 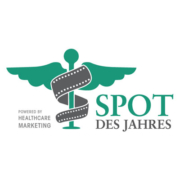 Healthcare Marketing: vhf triumphs at the spot of the year

Ammerbuch/Hauppauge, NY; March 9, 2020: The vhf video Dental from Deutschland looks at German virtues with a winking eye – happy ending included. The jury of Healthcare Marketing and Dental Marketing was so convinced of the clip that they awarded it with a gold medal in the competition for the spot of the year.

Around 40 industry experts selected the best films from the winners of the video competition Spot of the Month. The result: the vhf clip was the only work from the dental industry, which won gold in the B2B category. Four gold medals were awarded in total; the other three came from the B2C sector.

The star of the clip is the Z4 – a high-precision milling and grinding machine for same-day dentistry applications. Its futuristic housing contains latest high-tech that produces perfect dental restorations within minutes. The objective was to develop a film for this dental machine that can be used at trade shows worldwide, on the vhf homepage and in social media. The intention was to tell Made in Germany in a completely different way and as surprising as possible.

Christine McClymont, Head of Marketing and Communications at vhf camfacture AG, is happy with the result: “Our agency SSW from Frankfurt has congenially realized this challenging task with ‘Dental from Deutschland’: in a humorous story about German clichés and virtues and with a lot of courage for self-irony. High-tech from Germany, sold with a wink and extraordinary humor – this was immediately well received, both internally and by our international customers. Which proves two things: firstly, that communication can change the image of a brand in the long term. And secondly, that Germans are very capable of laughing at themselves.”

Healthcare Marketing published the jury’s verdict and more about the individual winners in a special issue of the Spot of the Year, which appeared on February 24, 2020. The video Dental from Deutschland can be found on the website (vhf.de/dental) and on the YouTube channel of vhf.