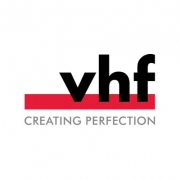 Ammerbuch, June 11, 2015: Since Fespa 2015, the international trade fair for screen, digital and textile printing in Cologne, vhf camfacture AG has changed to a new stand system with great back-lit walls. So the visitors can enjoy a bright and more modern appearance of the stand.

However, not only the walls are shining: a widely visible ceiling ring serves as an eyecatcher in the hall. The structure of the ceiling ring is also used for lighting up the machines and thus the sample production is optimally staged for the visitors. The new design of the stand enchanted both, the visitors and the stand personnel. In September, the new system will be used for the next time at Euromold in Düsseldorf.