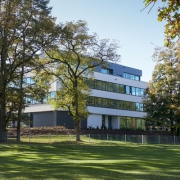 Fürth, August 14, 2015: vhf elektronik GmbH from Zirndorf is expanding and moves their principal office to the neighboring city of Fürth. Recently, the construction works for their new company building have started there in the industrial and local recreation area “Golfpark Fürth”. The building should be finished until June 2016, and it will provide the urgently needed space for administration, development and production.

The total floor area of the building will amount to nearly 1,900 square metres on a land size of approximately 6,000 square metres. The building will be divided into eight smaller office rooms, one large open-space office, three electronics laboratories, one production hall and several ancillary and installations rooms. The building contractor MAUSS from Erlangen has been charged with the task to erect the new building which will be technically state-of-the-art with future-oriented equipment and appliances. For instance, a geothermal installation enables environmentally friendly heating and cooling and on top of that a solar power system generates electric energy.

The new building distinguishes itself by a modern use of forms and furthermore, large windows on all three storeys facilitate well-lit rooms and open the sight to the adjacent golf course. “An appealing location and the possibility to also let one’s mind wander is important for us. We want to offer our employees a pleasant work atmosphere so that they feel comfortable and can be productive at the same time,” says Wolfgang Schöberl building owner and managing director of vhf elektronik GmbH. On top of that the area “Golfpark Fürth” offers an ideal infrastructure – it is just a few kilometres away from the city-centre of Fürth, furthermore the motorways A3, A6, A9 and A73 as well as the Nuremberg airport can be quickly reached.

vhf elektronik GmbH was founded in 1997 and is the second-oldest company of the vhf group after the vhf camfacture AG. They are specialists for innovative FPGA designs and electronics development; they deliver the CNC controllers for all vhf CNC milling machines.

Support for Save the Children
Scroll to top